98. It is a well-known fact that divorce is an unpleasant experience for all the members of a family. As a result, _______.

a) whether or not to get a divorce should be the choice of the couple involved, not other people
b) people who do not love each other should never attempt such a thing
c) the children of divorced parents suffer from psychological problems
d) such a decision should not be made without considerable thought

a) They can determine fatherhood.
b) Institutes have to have costly lab equipment to conduct them.
c) Criminals can easily be identified by DNA tests.
d) The probability of certain diseases can be detected by such tests.

100. Apart from being a means of communication, human language is one of the principal means of all mental activities.

a) Human language is, among other things, a means of thought, introspection and problem
solving.
b) Along with other peculiarly human capacities, language is involved in the most important human characteristic – foresight.
c) Language keeps us aware of past and future, of continuity of existence and its extension beyond what is immediately sensed.
d) Human language, which is a system of interpersonal communication, is absolutely distinct from any system of communication used by other animals.

101. No matter how broad minded and modern we become, we cannot get rid of the tendency to see women as second-class citizens.

a) Even though today’s woman has become a member of the work force, her primary role
continues to be that of homemaker.
b) In business life, there still seems to be discrimination against women.
c) Many working women complain that even though they contribute to the family budget, they don’t have a say in making decisions as far as purchases are concerned.
d) More and more women are experiencing the privilege of being helped by their husbands despite the negative reactions from other men in the society.

Mark the alternative which best completes each paragraph.

102. The wild turkey existed in great numbers when the settlers first arrived in America. _________ The axe, the plough and the gun are blamed for the decline of the wild turkey. Recent game propagation laws prohibit the shooting of anything but the bearded animals, usually males, to protect the brooding hens.

a) This great number seems to be a result of a combination of factors.
b) These days, however, their numbers have decreased so much that they can no longer be found in some states.
c) It is said that this particular breed of turkey is still found in abundance in many states of
America.
d) This breed of turkey owes a lot to the settlers who attempted to increase the size of its
population.

103. The fundamental components of the environment are plants, animals, minerals and water. When their inter-relationship does not change much from year to year, we observe a balance of nature.
_________ As an example, the minerals taken from the soil are restored, and the plants that die are replaced by similar plants.

a) That is, the addition of plants, animals, minerals and water is equivalent to the quantity that has been removed.
b) After the balance of nature is disturbed, a period of rehabilitation must occur.
c) Sometimes, however, the balance of nature is disturbed either by a geological change or a local agitation.
d) The first life to appear is called pioneer flora and fauna, which is very temporary and soon replaced by other forms of life.

104. Balloons have recently been used in a new medical procedure, known as balloon valvuloplasty, to open up stiffened heart valves in aging adults. The four valves in the heart keep the blood going in the right direction, and if the valves become stiff, the result can be deadly. ___________ The inflated balloon will split the valves apart, allowing them to open and close more freely.

a) In the past, several other procedures were used to open stiff valves.
b) This procedure has been done since 1979 in children with valve disease, but it has just
recently been done with adults.
c) In this procedure, a small balloon is inserted into the heart and then inflated with a saline  solution for up to forty seconds.
d) After this procedure, the patient can be given a local painkiller and can leave the hospital
in a few days. 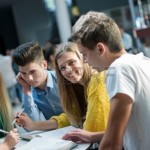 105. Earthquakes are caused by the movement of 50-mile-thick plates that comprise the earth’s crust. More than two thousand earthquakes occur daily somewhere on our planet, but about 95 percent of them are too weak to be felt except by sensitive seismometers. ___________ Each year, however, about ten powerful earthquakes strike somewhere on earth, causing extensive damage and loss of life.

a) A strong earthquake can virtually destroy a city in seconds, leaving thousands of people dead, injured or homeless.
b) Of those that are felt by humans, most cause relatively little damage, particularly if they occur in sparsely populated areas.
c) A mild earthquake may do no more than rattle windows; a severe earthquake can devastate a city and reduce it to a pile of debris.
d) Scientists have observed that certain phenomena seem to occur before an earthquake as the  pressure within the plates intensifies.