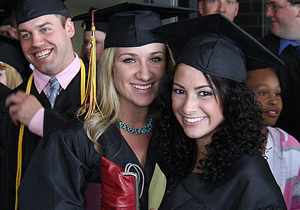 1 ♠ During childhood, sisters and brothers are a major part of each other’s lives for better or for worse. As adults they may drift apart as they become involved in their careers, marriages and families. But much later in life, after retirement, when the children leave home and parents and sometimes spouses pass away, brothers and sisters often turn to each other for a special closeness and link to the past. “In the stressful, fast-paced world we live in, the sibling relationship becomes for many the only intimate connection that seems to last,” says psychologist Michael Kahn of the University of Hartford. Friends and neighbors may move away, former coworkers are forgotten, marriages break up, but no matter what, our sisters and brothers remain our sisters and brothers.

2 ♠ The late-life bond between siblings may be especially important to the “Baby Boom” generation, people who were born in the United States from 1946 to 1964 when the birth rate increased dramatically. These people, now in adulthood, average about two or three siblings each. Divorce rates are high among the members of this generation because they have different values from their parents; they do not attach the same level of importance to family as their parents. For the same reason, most of those couples who stayed married decided to have only one or no children. Divorce and having one or no children will force members of this generation to look to their brothers and sisters for support in old age.

3 ♠ Another important factor in sibling relationships is critical events. Critical events can bring siblings together or deepen an existing gap. Parental sickness or death is a prime example. A study done by the University of Cincinnati showed that siblings engaged in rivalry and conflict were even more torn apart by the death or sickness of a parent. On the other hand, those siblings who had been close since childhood became closer.

4 ♠ As brothers and sisters advance into old age, closeness increases and rivalry diminishes. Old age is seen as a time to heal wounds. Older people tend to focus more on what they need now than on bad events of the past. As a result, people become more involved with and interested in their siblings as they age. Most elderly people have supportive and friendly dealings and get along very well with their brothers or sisters. Furthermore, with family and career obligations reduced, they have more time for each other. Another reason for increased contact is anxiety regarding a sister’s or brother’s declining health. Many older people like to check in on their siblings to see how they are doing. Siblings also assume special importance as other sources of contact and support weaken. Each of us moves through life with a group of people who supply comfort and nurturance. As we age, the size of this group gradually declines because of death, sickness or moving. Brothers and sisters who may not have been important members of the group earlier in life can become so in old age. And they do more than fill in gaps. The loneliness older people feel cannot be satisfied by just anyone. They want a specific type of relationship, one that only someone who had shared their past could provide.

5 ♠ This far-reaching link to the past is a powerful bond between siblings in later life. There is a review process we all go through in old age to resolve whether or not we are pleased with our lives. A sibling 2 can help retrieve a memory more accurately. We can remember some with our spouse or with friends but the only person who goes all the way back is our sister or brother. Only they can help us remember the past events the way they happened. Discussing the past helps us feel the warmth of early family life once again. Furthermore, going back in time with a sister or brother can improve our morale.

6 ♠ Some of the factors that affect how much contact siblings will have, such as how near they live, are obvious; others are more unexpected. For example, relationships are closer if there is a sister involved. Elderly people most often feel closest to a sister and are more likely to keep in touch through her. Sisters, by tradition, often assume a caretaking and kin-keeping role, especially after the death of their mother. In many situations, two brothers do not talk to each other that much but keep track of each other through their sisters. Researchers have found that the bond between sisters is strongest, followed by the one between sisters and brothers and, last, between brothers.

7 ♠ Sisters and brothers who live near each other will, as a matter of course, see more of each other. However, proximity is not crucial to a strong relationship later in life. Because of multiple chronic illnesses, people in their 80s and 90s cannot get together that easily. Even so, these siblings seem to evoke positive feelings based on the images or feelings inside. Just the idea that the sibling is alive and that there is someone they can call is comforting, so while contact among siblings may decrease, positive feelings increase.

8 ♠ Although older people may find comfort in the thought that their siblings are there if they need them, they rarely call each other for help or offer each other instrumental support, such as borrowing money, or help with shopping or cleaning. There are several reasons why siblings do not turn to each other more for instrumental help. First, since they are usually about the same age, they may be equally needy or weak. Another reason is that many people consider their siblings safety nets who will save them after everything else has failed. A son or daughter will almost always be turned to first. It’s more acceptable in the society to look up or down the family ladder for help than sideways. Finally, siblings may not turn to each other for help because of hidden rivalry. They may believe that if they need to call on a brother or sister, they are admitting that the other person is a success while they are a failure. Therefore, some people would rather continue on their own than ask their sister or brother for help. Despite the quarrelling and competition many people associate with the mere mention of their sisters and brothers, many will find unexpected strengths in this relationship in later life. As people age, their siblings become the most important people in their lives. As a result, one sibling may be worth all the friends, colleagues, neighbors a person has.

Part A: Fill in the blanks in the following sentences with information from the text.

Part B: Complete the following summary of paragraph 4.

Part C: Answer the following questions according to the information in the text.

9. Which of the following is NOT mentioned in paragraph 8 as a reason why older siblings rarely ask each other for favors?

a. They prefer to seek help from other family members first.
b. Siblings of an old person may not be in good conditions, either.
c. They get help from other members of the society.
d. They do not want their sibling to think that they have failed.

10. According to paragraphs 6&7, who would have a stronger relationship after losing their parents?