The use of relative pronouns in adjective clauses

Adjective clauses can be classified according to the function of the relative pronoun in the clause.

Adjective clauses whose relative pronouns are used as a subject.

In the examples , you see that the adjective clauses begin with who or which. An adjective clause whose subject is who or which has the same meanings as th Turkish verbs which can be made into adjectives by using the Turkish suffix – en or – an such as ‘ gelen adam , çalışan çocuk.

Adjective clauses whose relative pronouns are used as an object

As you see in the examples , whom and which are the objects of the adjective clauses. An adjective clause whose object is whom or which has the same meaning as the Turkish verbs derived by using the suffix – dık : aldığım mektup , gördüğüm adam. Whom is the object form of the relative pronoun who. It is rarely used in speech. In written English it may be considered more correct than who. Whom is often used with a preposition. If whom is used , the proposition comes before it : If who is used , the preposition comes at the end of the sentences. 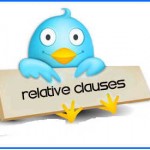 The people who were waiting for the 5 o ‘ clock İzmir bus saw something which they will probably never forget. Suddenly a large dog that had been quietly sleeping on the pavement woke up , started growling for no apparent reason , and began to attack a small boy who was cleaning shoes nearby. Everyone thought that the dog must have had rabies. People screamed in horror and one man who was very brave tried to grab the dog by its tail. However , they needn’t have worried. The small shoeshine boy who had once been a shepherd boy was used to fierce dogs. He was more than a match for the animal. The bot bit a piece of f the dogs ear. The dog which was by then covered in blood quickly ran away. The police who promptly came on the scene later found the dog and shot it. Veterinary surgeons carried out tests which confirmed that the dog did not have rabies.